It was Tom, VK5EE, asking if I had been tracking the progress of the balloon which was launched earlier in the morning. Of course I had forgotten all about it. Tom informed me that it was going to come down right on our doorstep – almost – only about a kilometre from the launch site.

I ran inside and informed the treasurer that Tom and I were going out to try to find it and off to collect Tom I went.

Tom jumped into the shopping trolley Mk.11 with his yagi, attenuator, receiver and GPS and off we went. 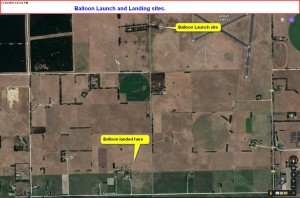 We headed out toward the Mount Gambier Airport along Sunnyside Road and turned left into Walkers Rd. After about half a kilometre we picked up the Sondes typical buz buz buz signal and then we lost it. Back up a bit says Tom. Being an obedient sort of bloke I did and the signal reappeared. After a bit of head scratching we finally got out of the car and Tom waived his yagi about a bit. It’s coming from behind that farmhouse says Tom. 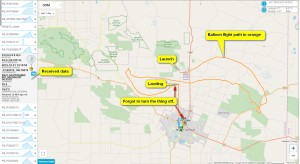 Off we go up the driveway, park the car and I go and knock on the front door. No sound ensues. Not to be deterred I walked around the back and tried the back door to be greeted by a very friendly lady in Robin.

I explained what we were up to, including pointing out that we were slightly mad, and she very graciously gave us permission to drive or walk around until we found the thing.

We walked over to the house fence and waived the yagi about a bit more and then Tom spotted the remnants of the balloon and the parachute 100 metres into the paddock. We opened the gate, drove through, closed the gate behind us and headed down to the spot. 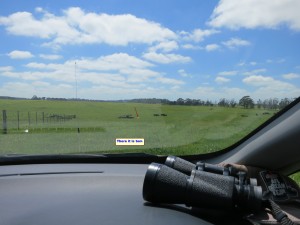 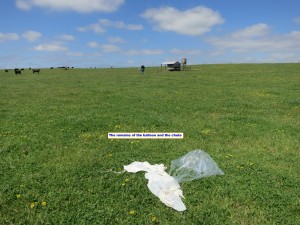 I walked over to check the parachute while Tom walked up the hill for 30 metres to find the transmitter. Once he picked it up I rolled up the tether line and picked up the remains of the balloon and the chute so that none of the cattle tried to eat them or got tangled up in the tether. 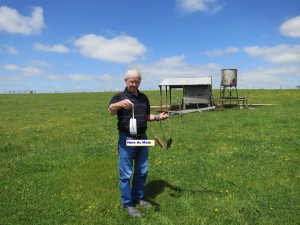 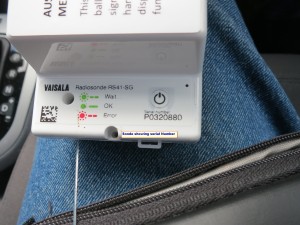 We then drove out of the paddock, (making sure that we shut the gate as we left), and Robin was out in the garden  and so we stopped and showed her the debris. She seemed very happy that we had picked it all up as she was obviously concerned for the stock and she said neither her or her husband would have know what it was.

We said our thank you’s and headed back to town.

Here are some shots of the balloons path and the data from it’s journey. 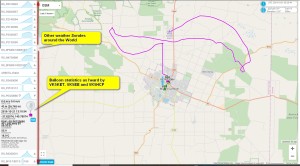 Another very pleasant couple of hours whiled away.

Thanks for the heads up Tom.

We will do it again if the Balloon look’s like coming down within a reasonable distance of home.

This entry was posted in HOME. Bookmark the permalink.